Danielle & Eric flew halfway around the world for their Paris wedding in the Shangri-La Hotel in Paris. Not surprising, as the personal motto of the couple from Boston is: “Let’s go far away and let’s see the world!” They both wanted a small intimate wedding somewhere far way. Danielle said: “We both love traveling so it was important to us that our wedding was a priceless memory for everyone attending. Half of the guests at our wedding don’t travel often. So our wedding was a once in a lifetime-experience for so many people. We were getting everyone to seeing the world!”

That was one of the reasons why the couple decided for a Paris wedding in the Shangri-La Hotel. Besides when Danielle travelled to France for the first time she instantly fell in love with the beauty of Paris. “If I could speak French, I would move to Paris tomorrow”, Danielle told me. And she knew exactly how she imagined her wedding in Paris: romantic, breathtaking and classic Parisian.

When Danielle & Eric looked at paris wedding venues the Shangri-La Hotel in Paris turned out to be an absolute dream: Rooftop terrace with a view on the Eiffel Tower for their wedding, golden ballrooms and decoration all in gold and white. The Shangri-La Paris was just perfectly fitting to Danielle’s style vision of her Paris wedding: “Gold, white and black were my colors. And they showed in every aspect of my wedding.”

As their Paris wedding photographer I met Danielle & Eric early on their wedding day to take pictures when they were getting ready. Then the couple headed for their wedding ceremony in a beautifully decorated room in the Shangri-La Hotel. Danielle already knew that it was going to be an emotional wedding ceremony. So she made sure to have a very special family heirloom on her: her great grandmother’s handmade handkerchief for her happy tears. 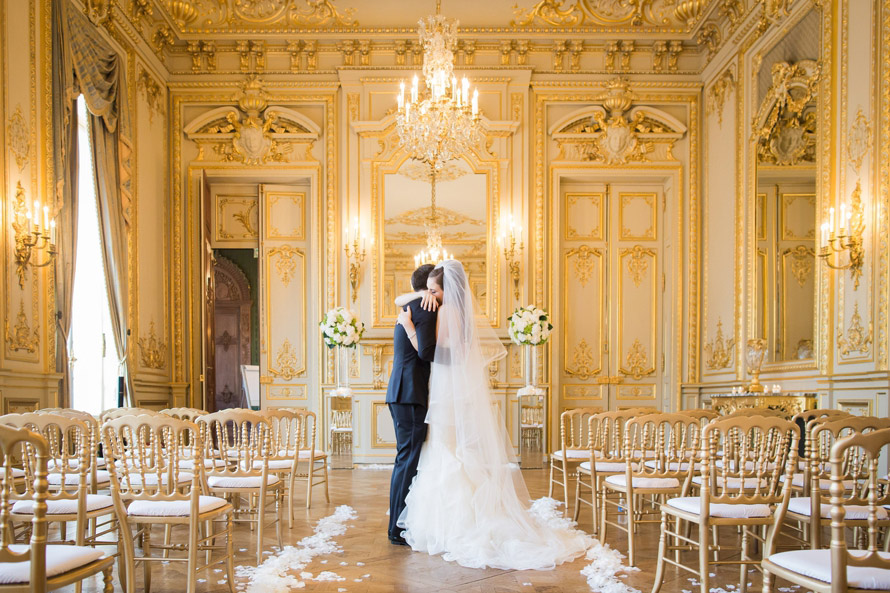 After the ceremony I took couple pictures of Danielle & Eric as their Paris Photographer: We went to the Seine Riverside, to Notre Dame and Alexander III bridge. Then we headed back to the rooftop terrace of the Shangri-La Hotel. There we enjoyed sunset and a beautiful view on the Eiffel Tower for a few more couple pictures. After sunset Danielle & Eric’s joined their guests again and their Paris wedding continued: They had their wedding reception in a beautiful ballroom at the Shangri-La Hotel.

Danielle & Eric’s families and friends were part of their Paris wedding in the Shangrila Hotel. And the couple was happy that all their loved ones came to celebrate their beautiful love story. Danielle & Eric first met 5 years ago at work. A co-worker introduced Eric to Danielle because he had just moved to Boston. Once they were introduced they continued to run into each other. Danielle said: “We hit it off right away!” So they started dating a couple of weeks after meeting. 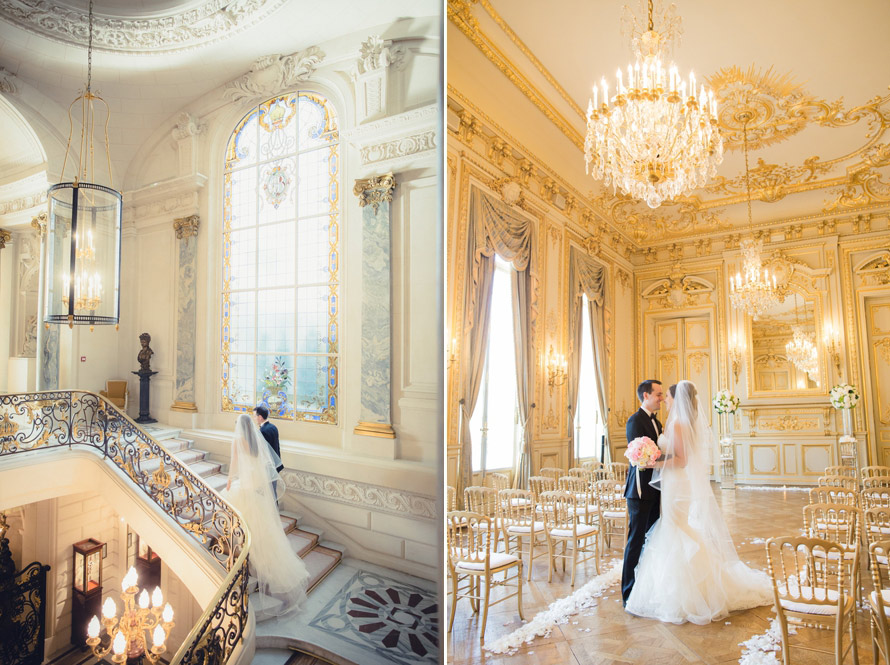 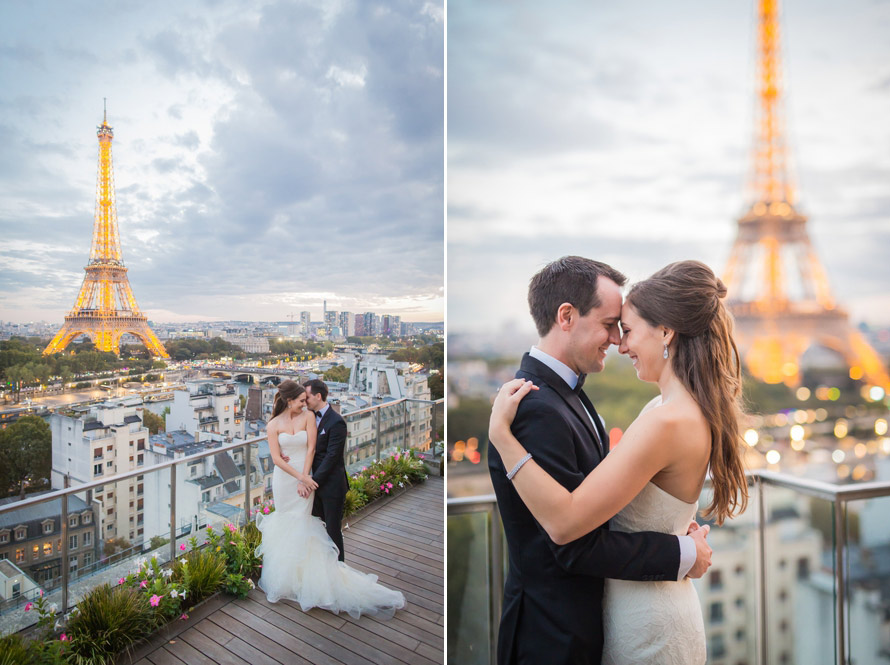 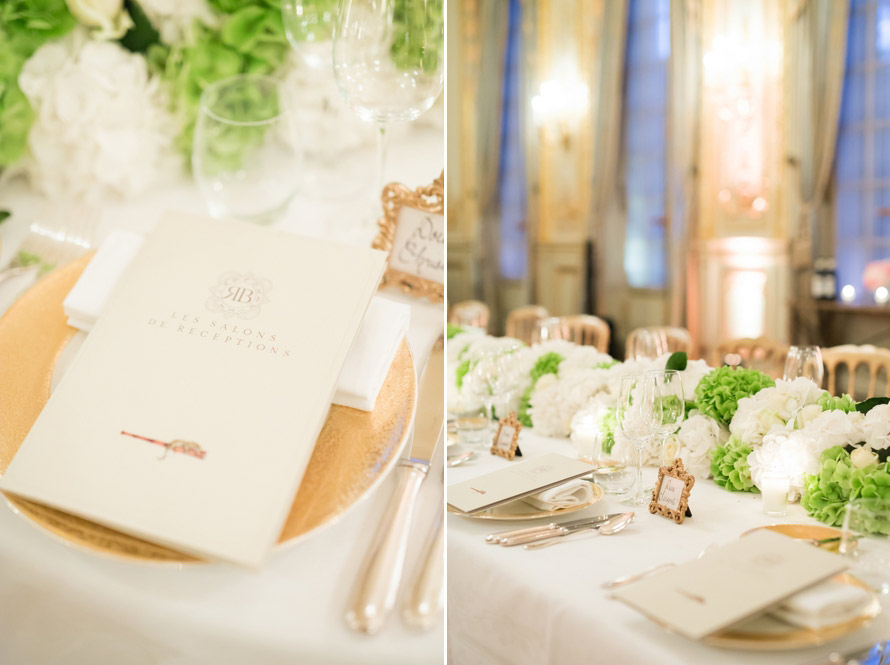 Just a perfect wedding day in Paris and the Shangri-La!

6 months later Eric surprised Danielle for her birthday with a flight to Europe to visit London, Amsterdam and Paris. Danielle said: “All cities were amazing! But Paris was so romantic and one of the most beautiful cities I had ever seen! Needless to say, Paris will forever hold a special place in our hearts.”
And another surprise followed: Eric had booked a boat to go around some islands in the Carribean. Danielle said: “Little did I know he planned to propose to me at the first island we went to. I was completely surprised! And I obviously said yes! It was a proposal I couldn’t have dreamed of!”
Travelling is obviously a great passion of both Danielle & Eric: So it comes as no surprise that they simply eloped with a destination wedding – more precisely a Paris wedding in the Shangri-La Hotel. For their honeymoon the moved on: After a week in Paris they flew to the Maldives and to Dubai. And they always stayed at the Shangri-La Hotel as they already made such a great experience with this hotel for their Paris wedding.

You can see more wedding pictures of your wedding photographer in Paris here or get to know more about elopements in Paris.