“I have always been a little untraditional”, Ashley told me when we were planning her elopement photo session. As her Paris photographer I only realized what she meant when I finally met Ashley and her fiancé Jason at the Eiffel Tower to take their elopement pictures. Her wedding dress with the large waterfall hemline was indeed exceptional – and so was her casually styled hairdo! No wonder she was catching the attention of plenty of passerby as we moved through Paris for their elopement photoshoot and their wedding ceremony.

Ashley and Jason are from New York City. They already met during freshman year of college. But for several years they were nothing but good friends. Eventually friendship turned to dating and dating turned to love. In 2013 they decided to embark on a lifetime of travel and adventure together. One year after they got engaged on Thanksgiving weekend in New York City at Washington Square Park with the local Arc de Triomphe in the background.

Paris Elopement at the Eiffel Tower

Ashley and Jason did not want a traditional big wedding – as Ashley already said about themselves: they prefer things a little more unusual. So they began planning a small destination wedding with just their immediate family in attendance. Ashley said: “We chose Paris because it is the most romantic city in the world. What better place to start our lives together!”

The couple wanted at first their ceremony to take place in front of the Arc de Triomphe du Carrousel in Paris (near Louvre) as a reference to the place where they got engaged – the Arc de Triomphe inside New York’s Washington Square Park. But the foot traffic all around this famous Parisian sight just didn’t make this realistic. So as their Paris photographer I helped them searching for a place that is fitting better. In the end Ashley and Jason decided for the Tuileries Gardens nearby. A beautiful and quiet backdrop, which offers a great view on the Eiffel Tower! In this public park the couple found a little privacy to exchange their vows.

Originally Ashley and Jason planned to elope in Paris. But they just could not do without their families! Ashley said: “The only thing I felt I would regret not having at my wedding was a father daughter dance. When I mentioned that my Dad immediately booked flights for himself and my mother to join us in Paris.” (Ashley enjoyed her father daughter dance later on her wedding day to Stevie Wonder’s “Isn’t she lovely”! 😉

Jason’s parents and his sister booked their flights shortly after. And Ashley’s sister was on board as well – actually she had quite an important task during the elopement in Paris: she was their celebrant in Paris. “My sister is my best friend, the person I share every important secret and who I go to for advice”, Ashley said. “It was natural to want her to join Jason and I as husband and wife.”

More Paris photos after their elopement ceremony in Paris

So after Ashley and Jason’s had their elopement session around the Eiffel Tower on Trocadero square, the Louvre, the Arc de Triomphe du Caroussel, the Seine riverside and a cute little Parisian café, their destination wedding definitely peaked with their ceremony in Tuileries Gardens where they exchanged their vows and wedding rings. Ashley’s choice in bridal gown, hairdo and ceremony was already untraditional. And so was her wedding ring: Ashley chose a bright green emerald as this gem is her birthstone – so it was one more time an exceptional idea for an exceptional day in Ashley and Jason’s lives! 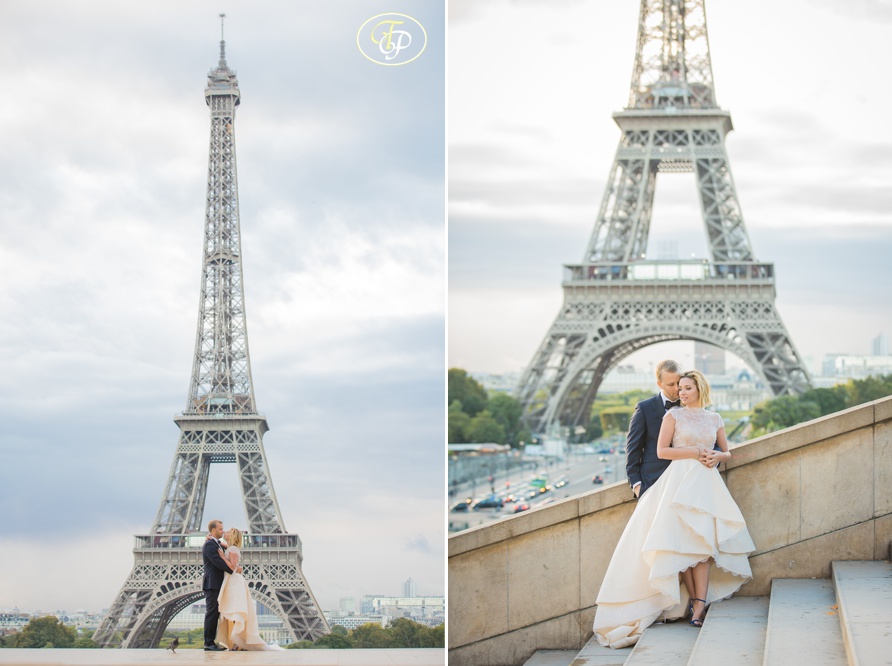 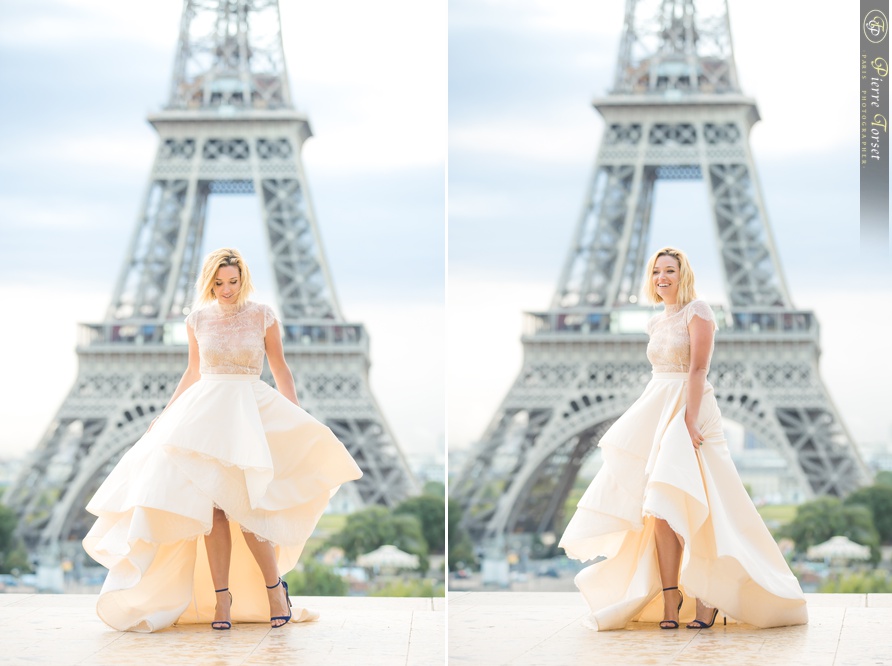 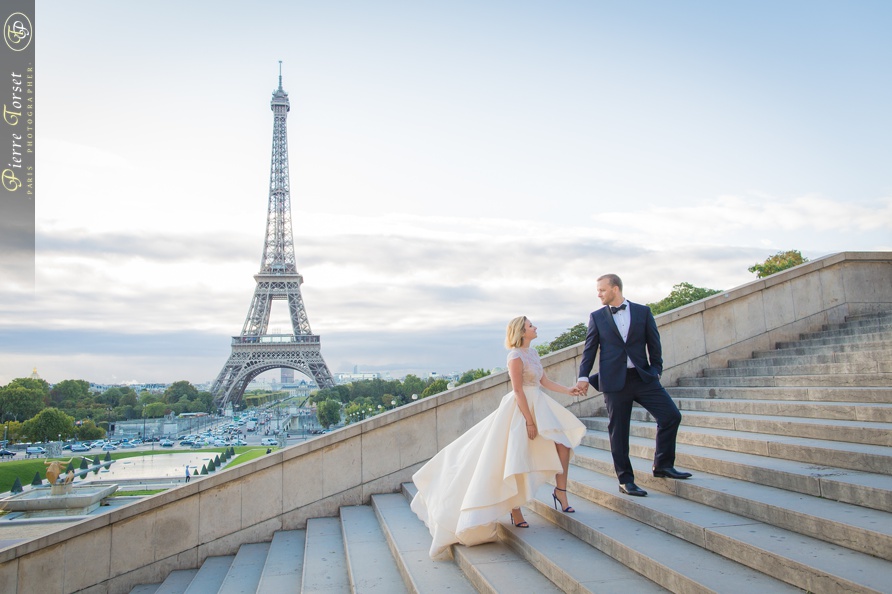 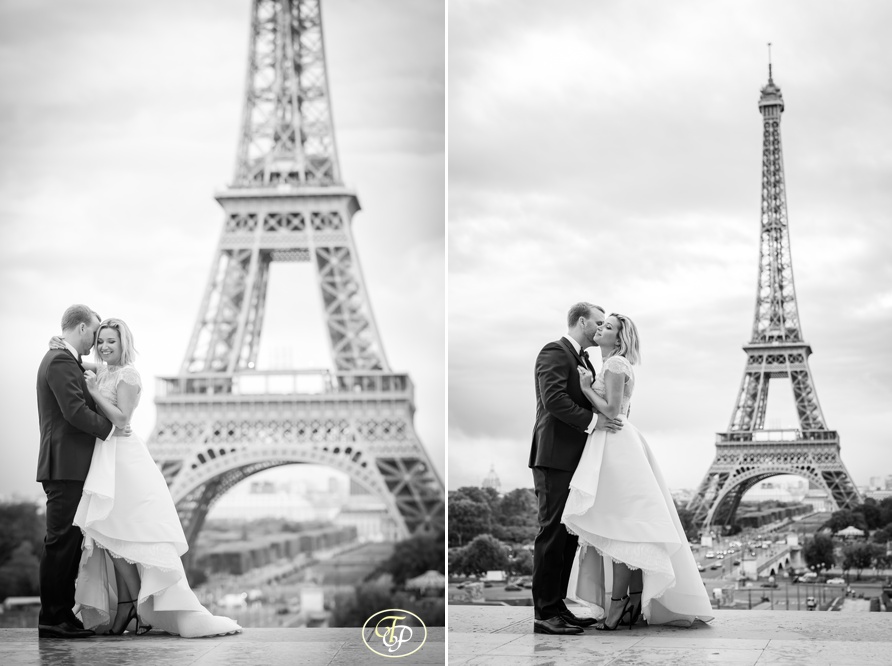 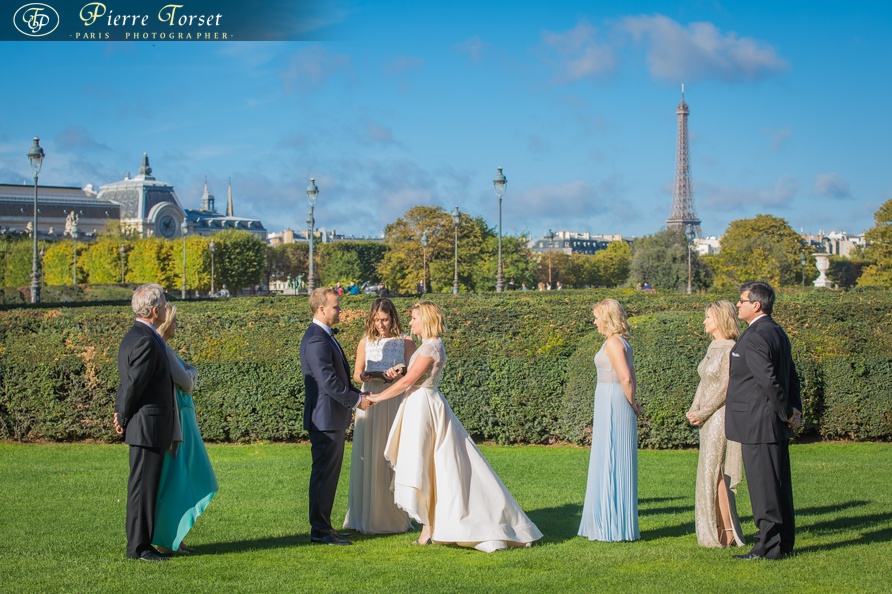 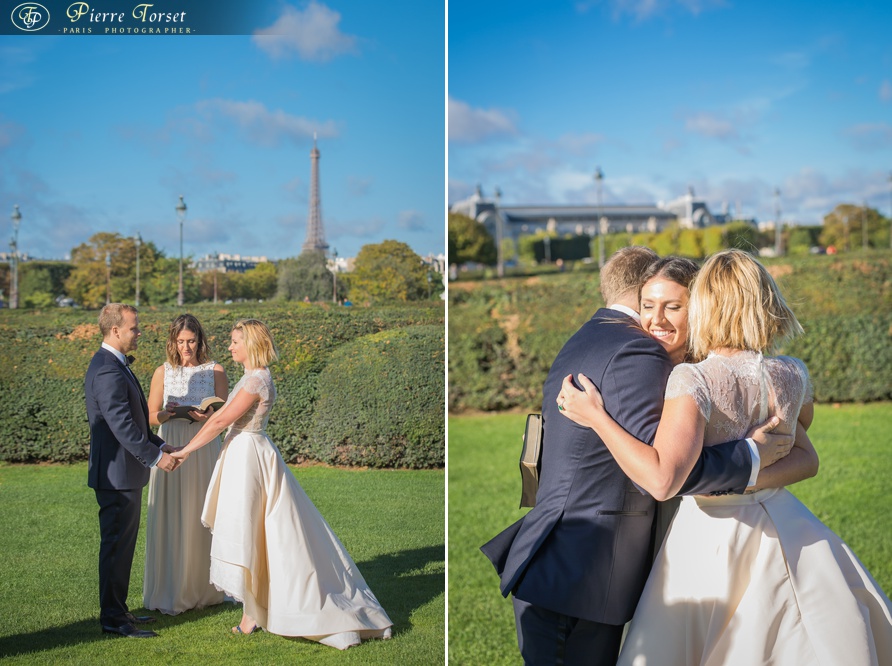 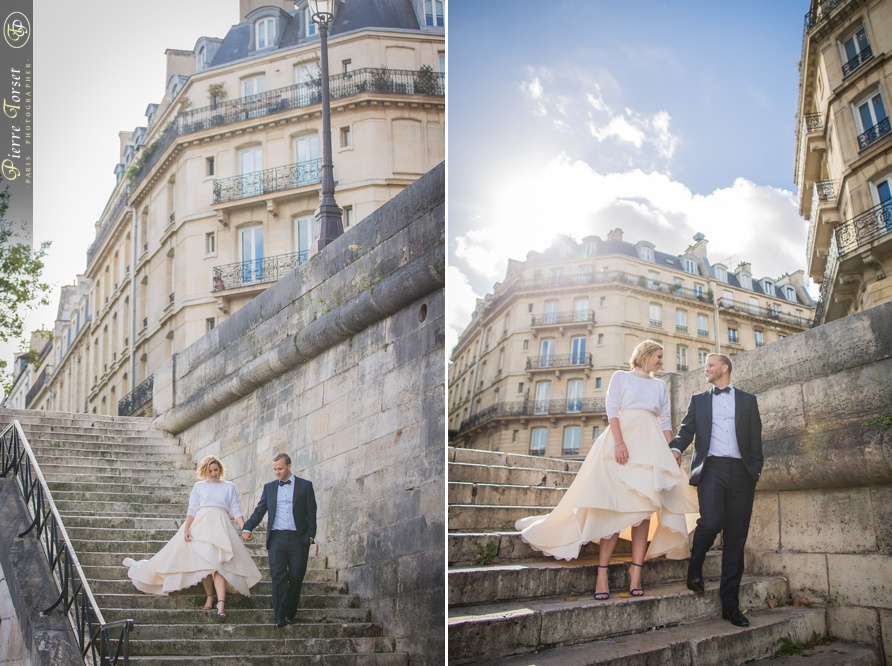 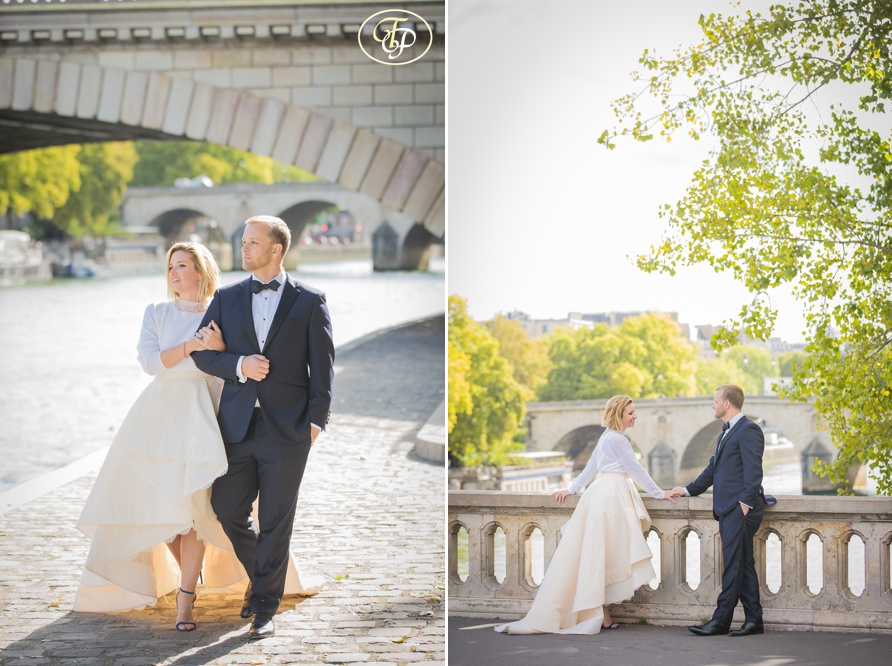 “My husband and I decided to have an elopement in Paris which was finally turning into a destination wedding at the Eiffel Tower and other paris landmarks. We contacted Pierre and he could not have been more helpful. From the beginning he always answered within one day. He gave us insider tips on where to get the best photos and helped us plan our itinerary with our favorite landmarks. Pierre even sent through recommendations for a car rental, hair and makeup artist and venues for dinner and brunch.
The day of our session with Pierre, he checked in with us and our vendors to make sure everyone was running on time. We met at a little coffee shop by the Eiffel Tower at sunrise to go over the days plan, and then headed out. His direction and placement were completely flawless. He was also not afraid to ask tourists very kindly not get in the way of our shots.
If you want a photographer that puts you completely at ease, choose Pierre! His photos are gorgeous and the shots are perfect in lighting and angles. We couldn’t have been happier with our experience. Book Pierre right now!”

By PIERRE TORSET – Paris Photographer. You can also see more elopement pictures in the Portfolio by your elopement photographer in Paris or find more information about eloping in Paris with celebrant in Paris Laura Montorio.