Theresa and David were indeed very lucky !
It’s quite rare to have such a perfect sky during a whole morning in Paris ! But it actually happened for their engagement photoshoot at the Eiffel Tower and a few other locations around Paris !

We had a 4hrs photo session together, from Eiffel Tower at sunrise to Louvre courtyard (with the pyramid), with a wardrobe change, and then a stop at a café for some pictures, and 2 more stops by late morning : the gorgeous Alexandre III bridge with the golden statues and Concorde square, famous for its beautiful fountains. As their engagement photographer in Paris, I could not be more excited: during this whole time, the sky has just been perfect for this mid-spring photo shoot in the City of Love. I loved both outfits that Theresa picked for her session. The first was colorful and so nicely popping up. And the 2nd one was elegant, but not overly formal. 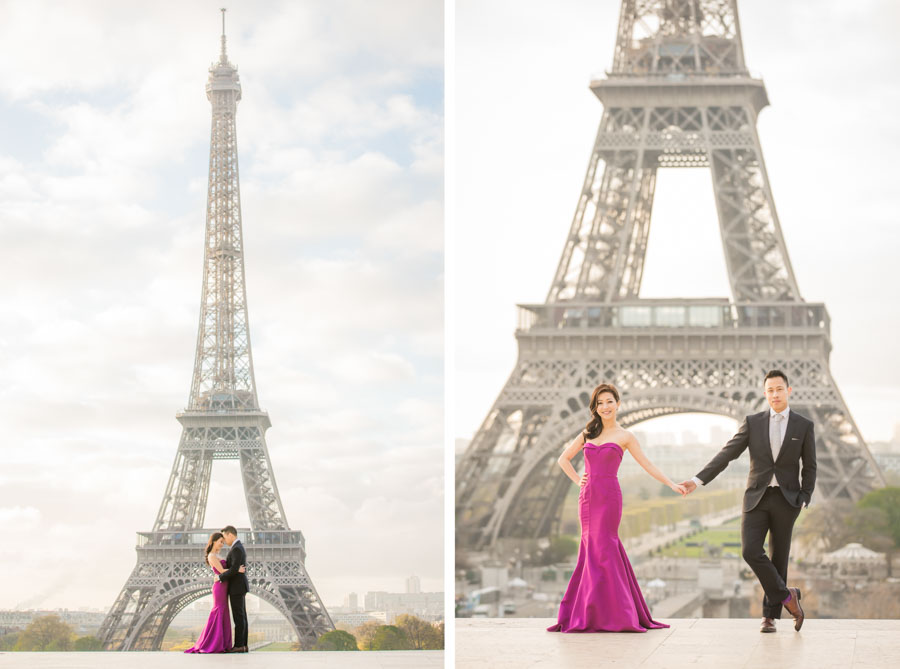 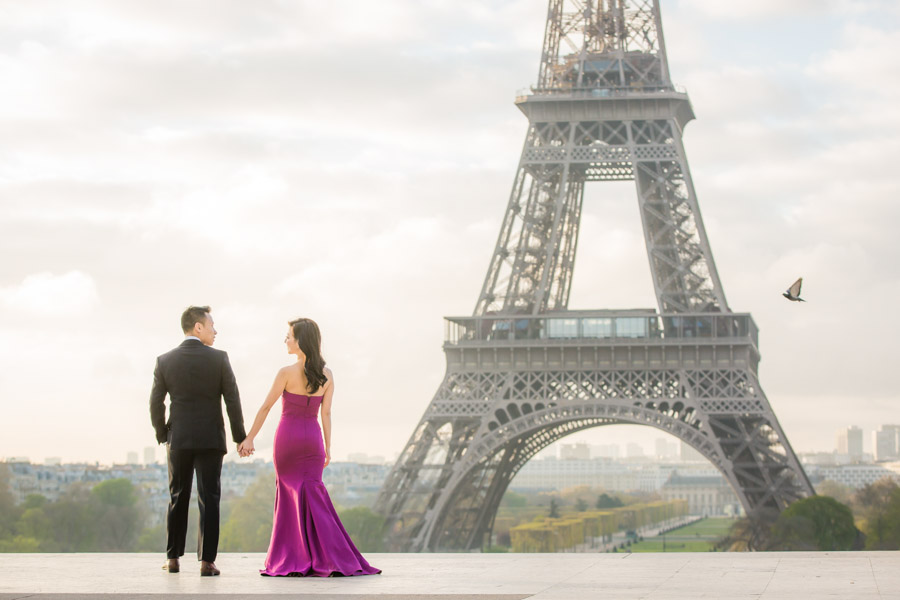 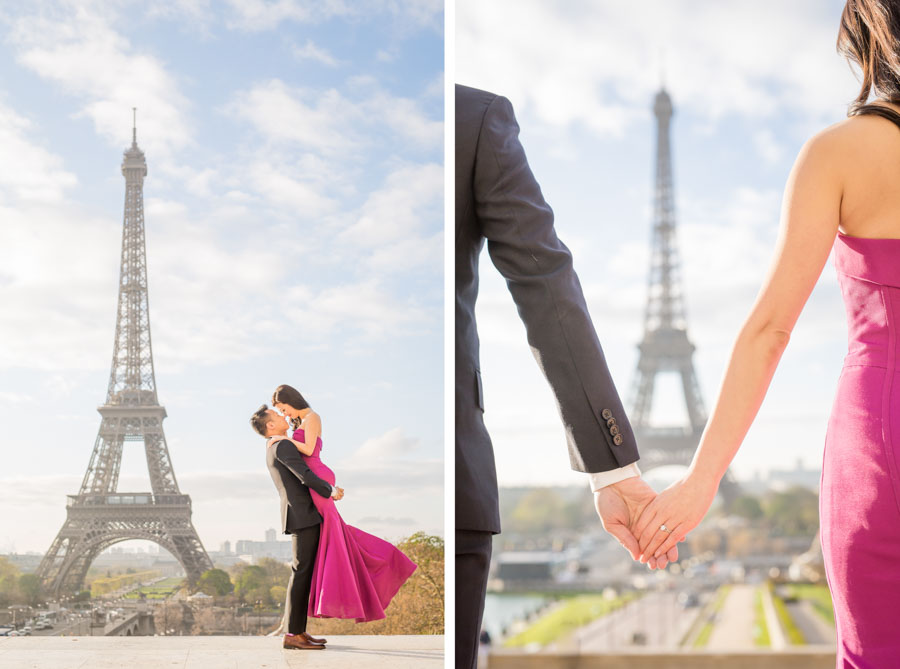 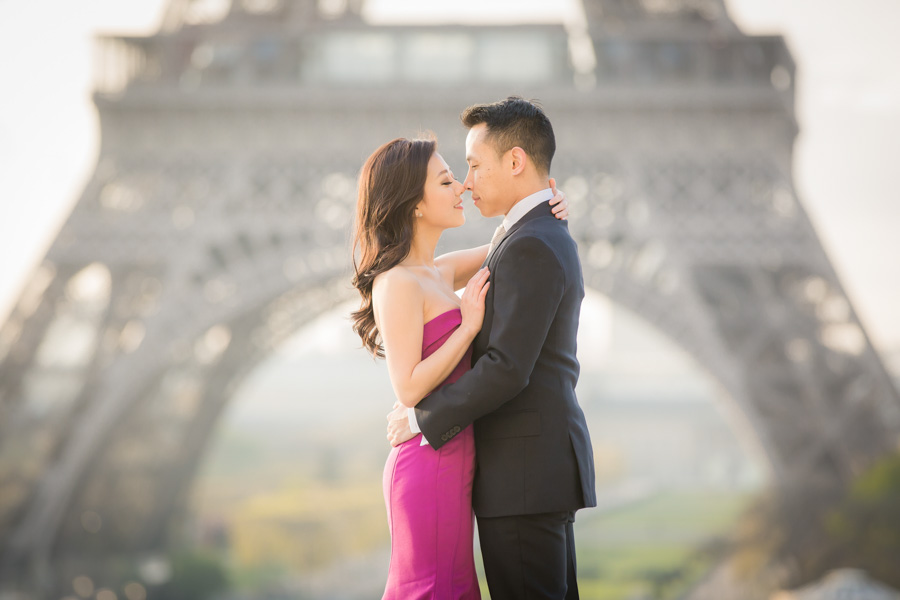 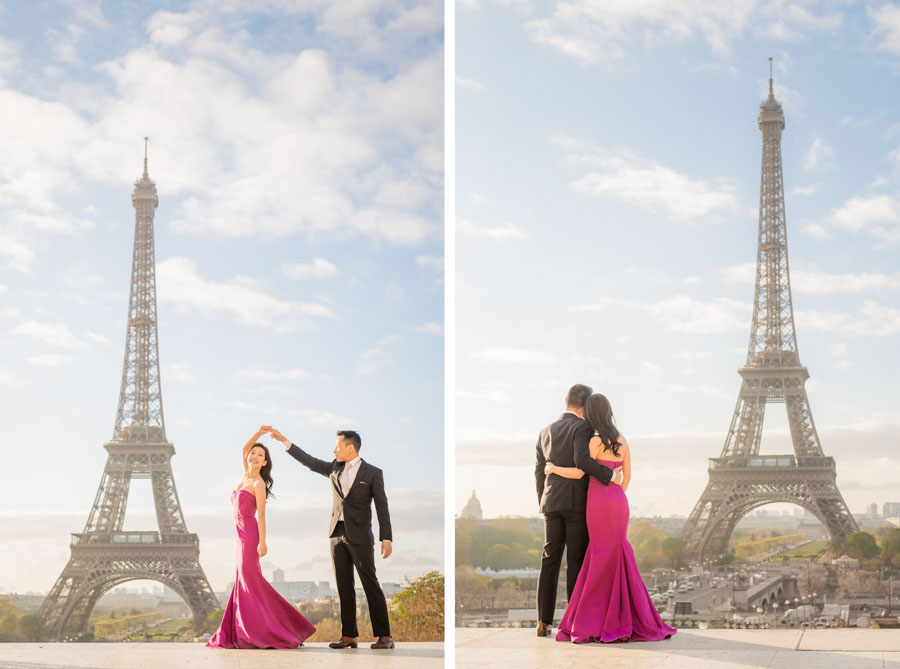 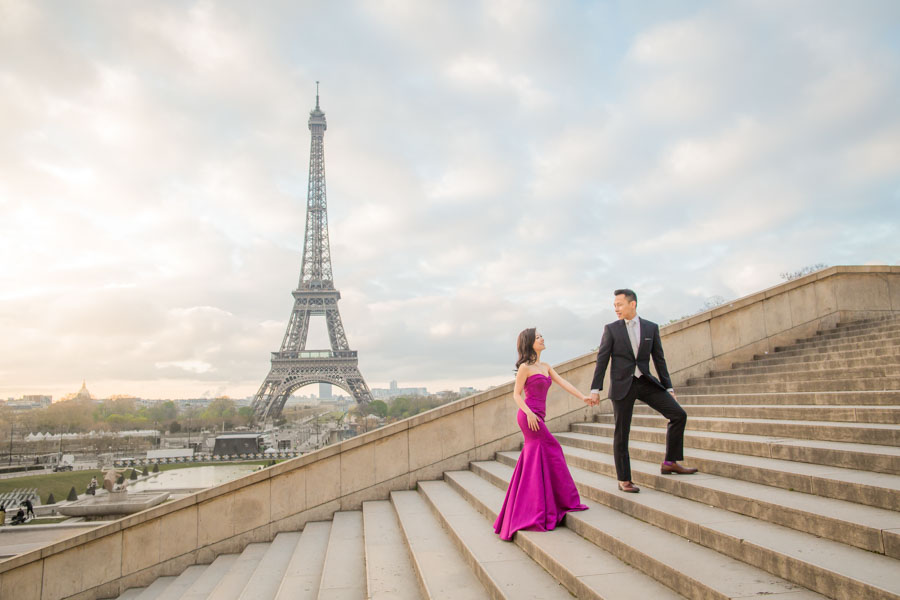 Love story of their engagement before coming to Paris

When, where and how did you meet and fall in love with each other?We met at university in Montreal, when David was a senior and I was a freshman. He moved to Seattle for work after graduating and I lost touch with him for many years until I randomly messaged him on Facebook about 6 years later, and we got back in touch. We continued to chat every day (for hours and hours and hours) until I decided to fly to Seattle to visit him. I don’t know the exact moment that we fell in love, but it was very very shortly after that!

When, where and how did he propose?
David proposed to me on September 12, 2016. I flew to Seattle to visit him for a weekend, and he secretly flew my friends to Seattle beforehand to surprise me when I arrived. They said that they were all there for my birthday (which was partly true because my birthday was coming up soon) and kept the proposal plans a secret. The next day, we all went on a treasure hunt throughout the city together, which involved solving riddles – David had also printed photos of us as clues. The treasure hunt ultimately lead to a nearby beach and lighthouse.

We had a picnic dinner with our friends at the beach, and right as the sun was setting, he asked me if I wanted to come with him to see the lighthouse. I said no, not really because I wanted to eat my dinner. He was insistent and I gave in – we walked towards the lighthouse and that’s when he proposed! I nodded yes in excitement.

Why did you decide to come to Paris (and chose to have a photo session here)?
I always wanted to visit and he had surprised me with tickets to Paris for my birthday (the same birthday that he used as a cover up for the proposal!). We thought it was the perfect opportunity to have our Eiffel Tower engagement photoshoot and we are SO glad we did! 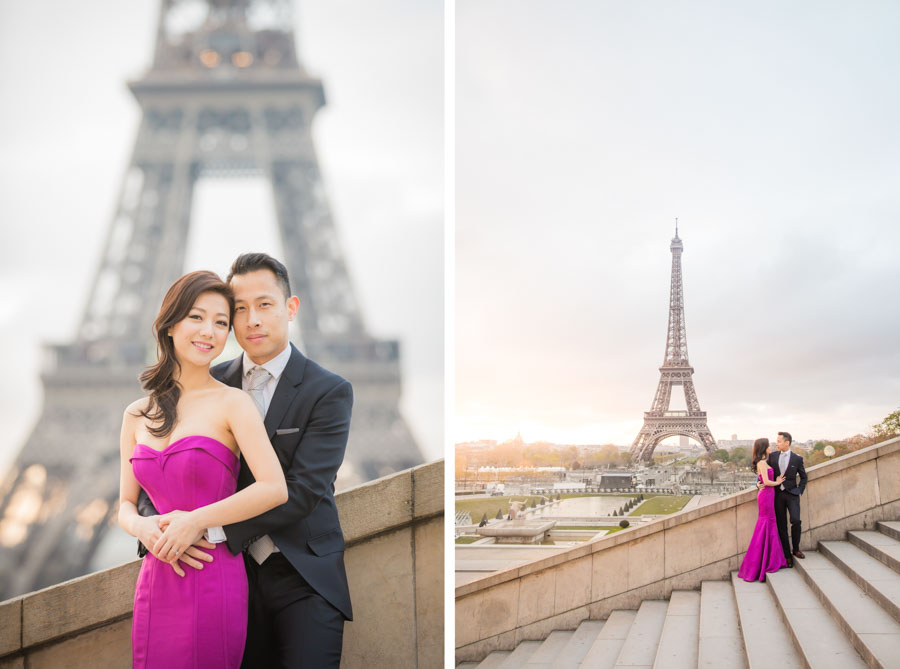 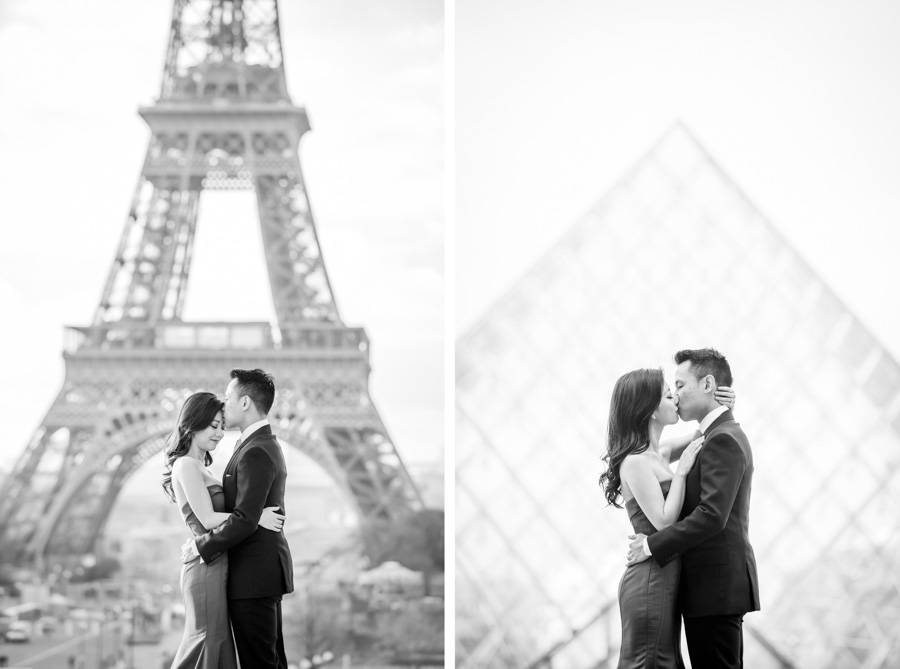 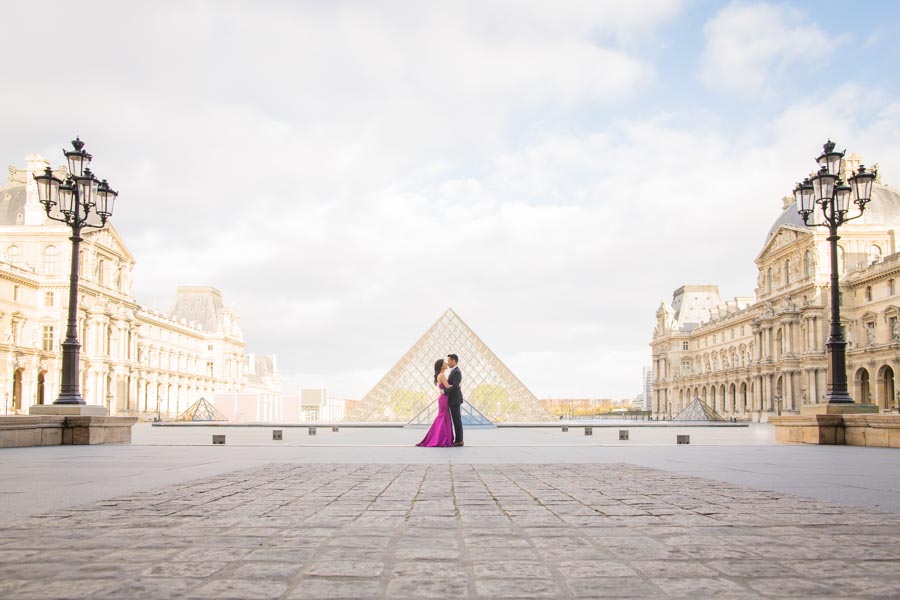 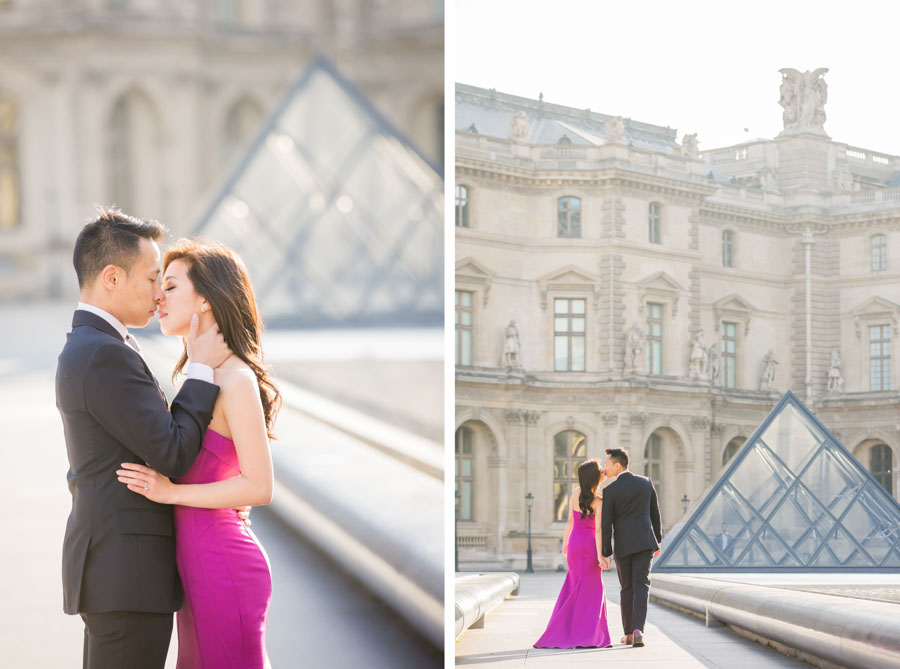 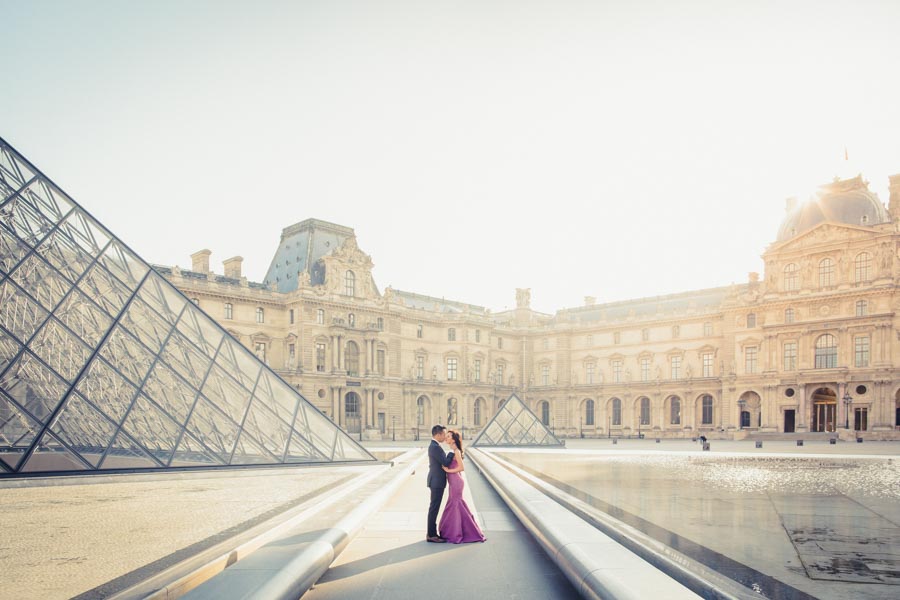 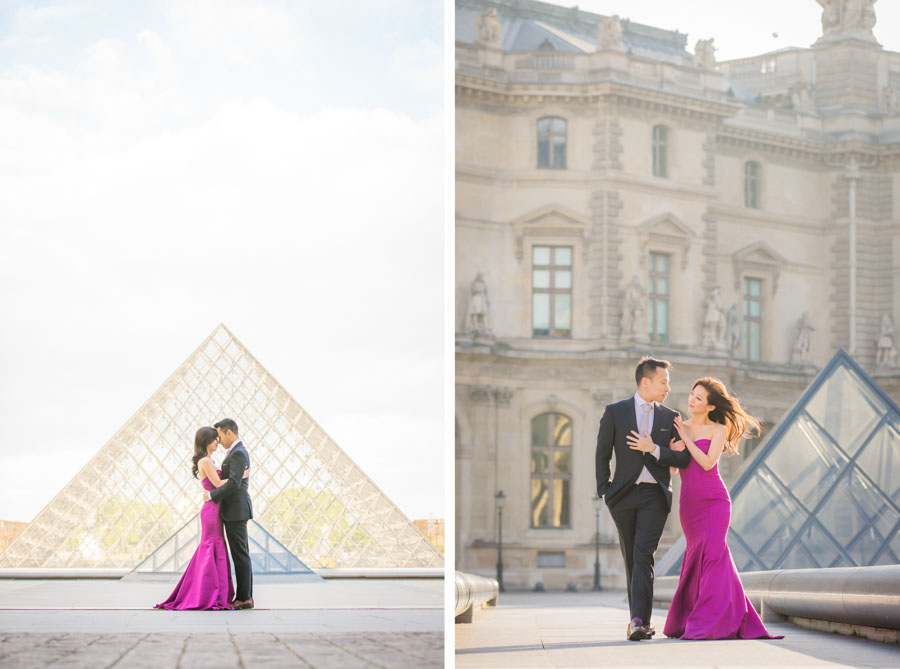 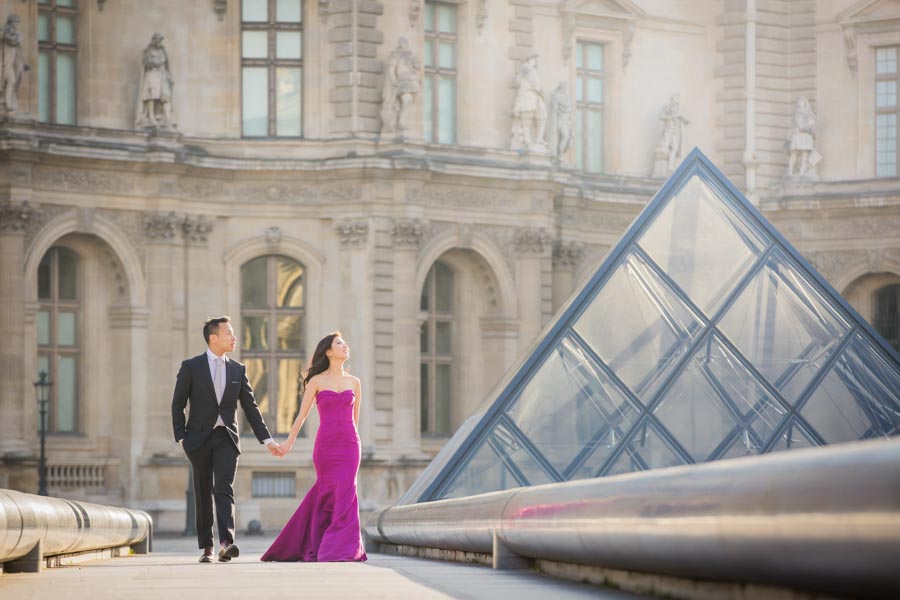 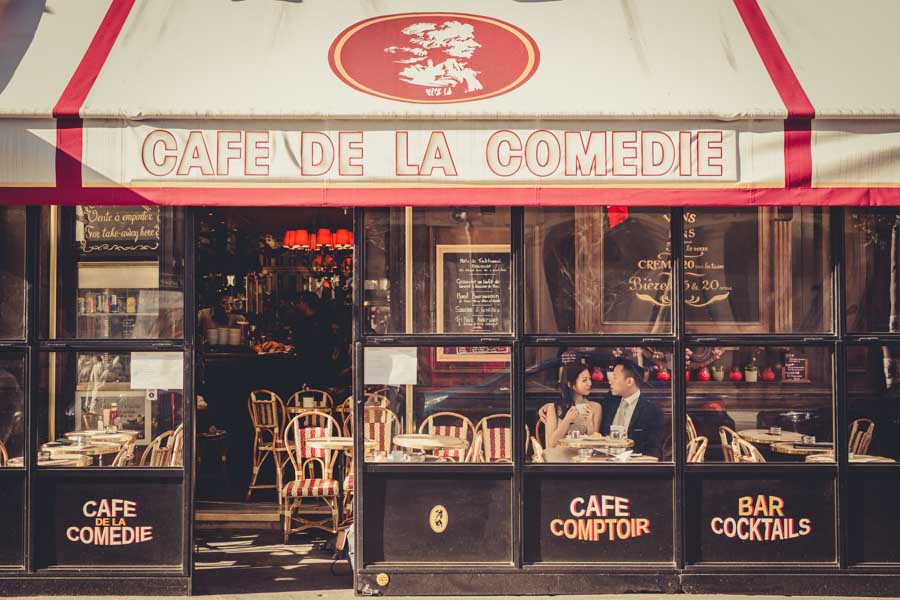 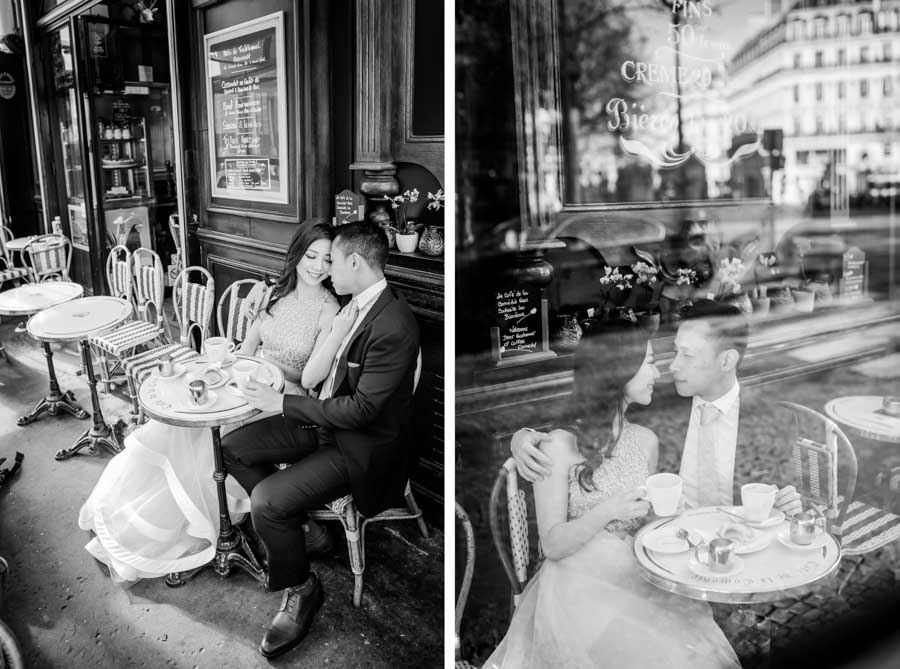 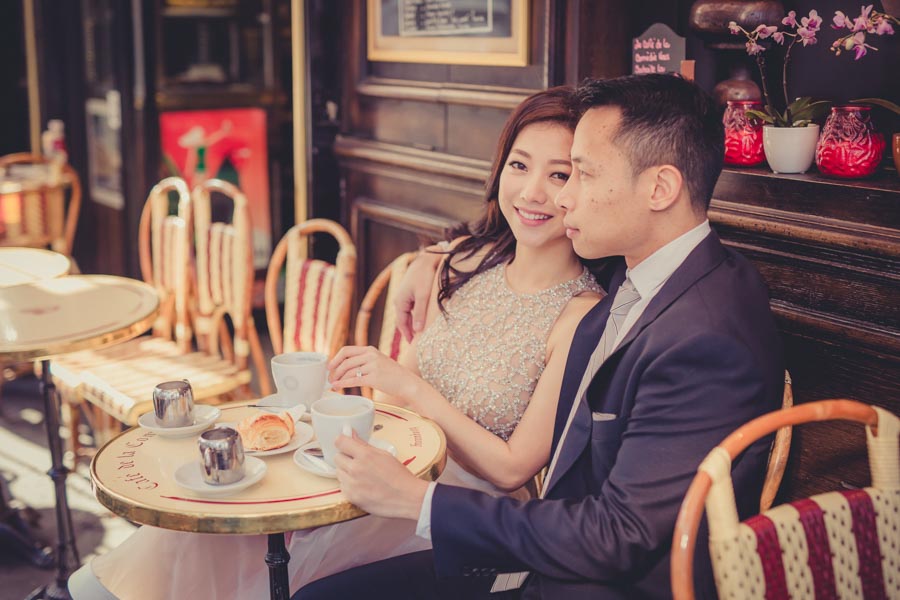 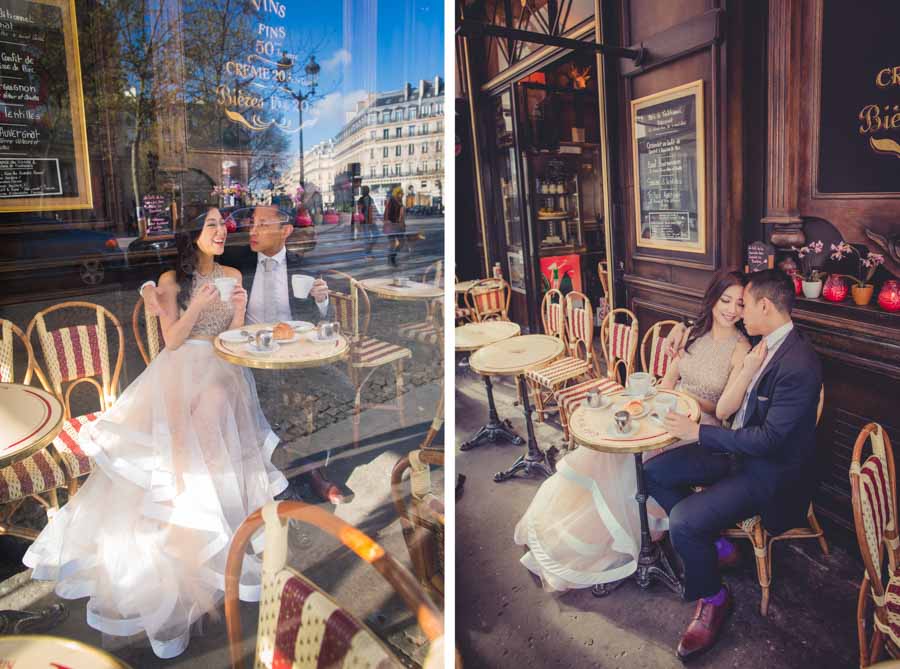 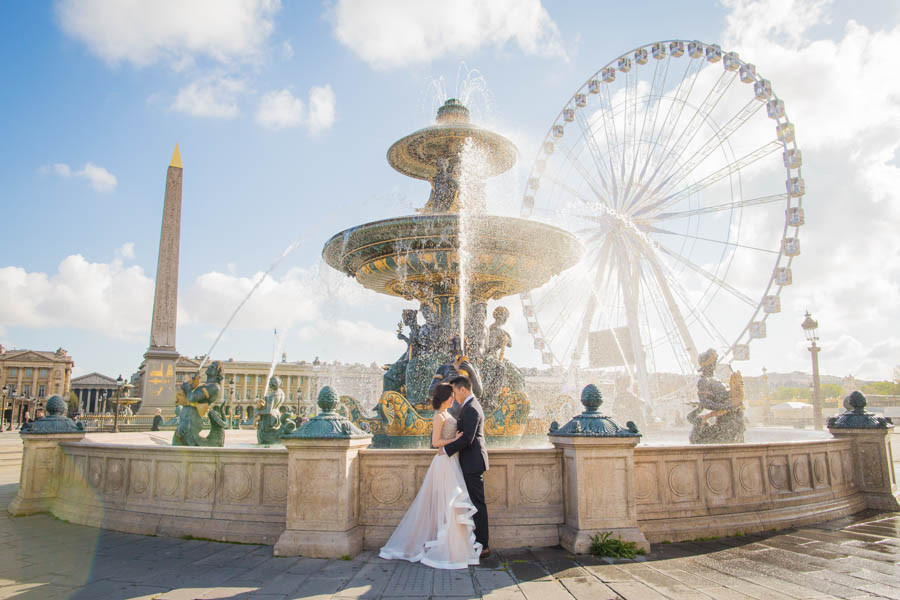 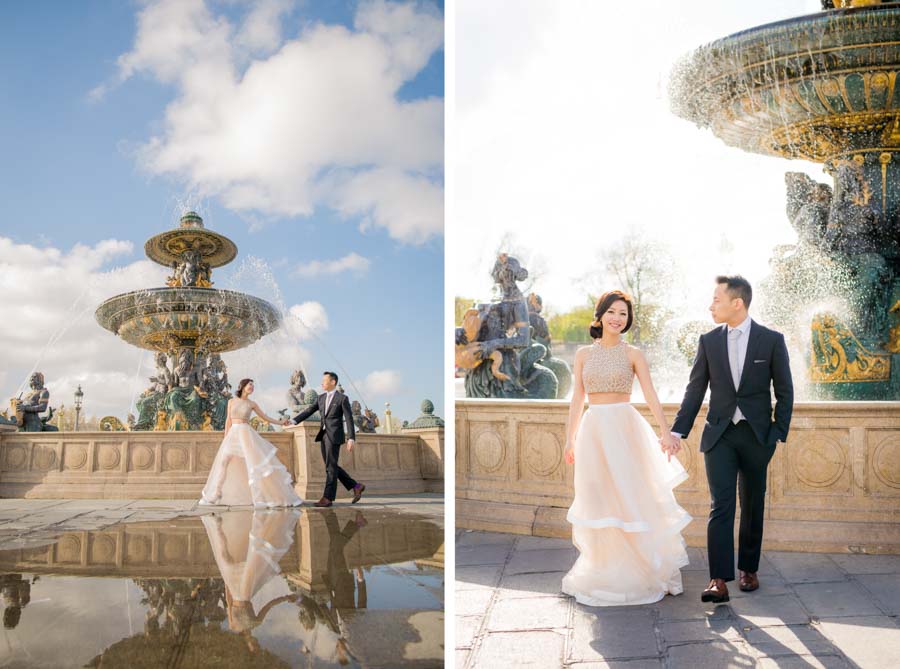 Which moment did you like most during your Paris trip/ photo session?
We really liked our shoot at the Trocadero in front of the Eiffel Tower. We had just landed in Paris the night before the photo session, so we didn’t really have a chance to see a lot of Paris that night. We got to see the buzzy atmosphere in Le Marais on a Saturday night, which was great. Then, Sunday morning for our Paris couple photography session was the first time we truly saw the Eiffel Tower and to see it early in the morning when it wasn’t crowded and with the sun rising in the distance was magical.

What was totally different than expected in Paris/ during the photo session?
We expected there to be many crowds but was really pleasantly surprised to see that it wasn’t overly crowded! I’m sure the early morning session helped with that.

I was also really surprised at how fun and comfortable the shoot was with our Paris photographer ! I think we are fairly camera-shy and we just felt really natural and completely involved and immersed in the moment. Your directions and guidance for poses were super helpful too. Thanks for making us feel comfortable during the shoot! 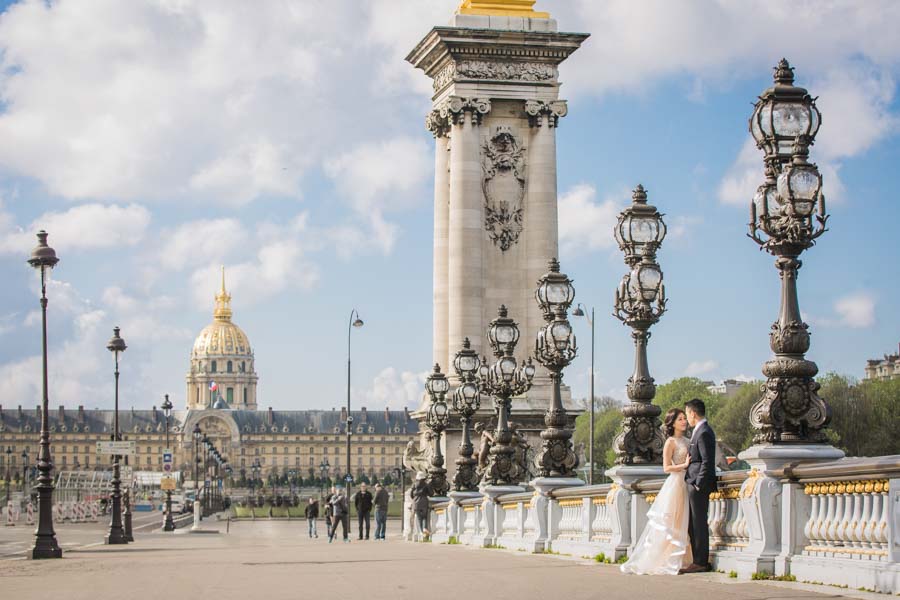 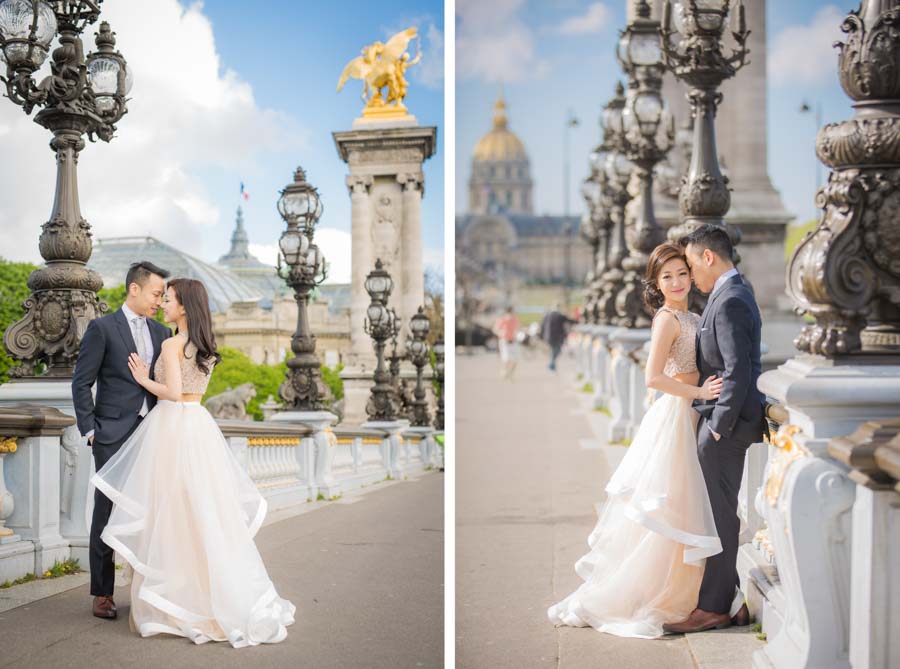 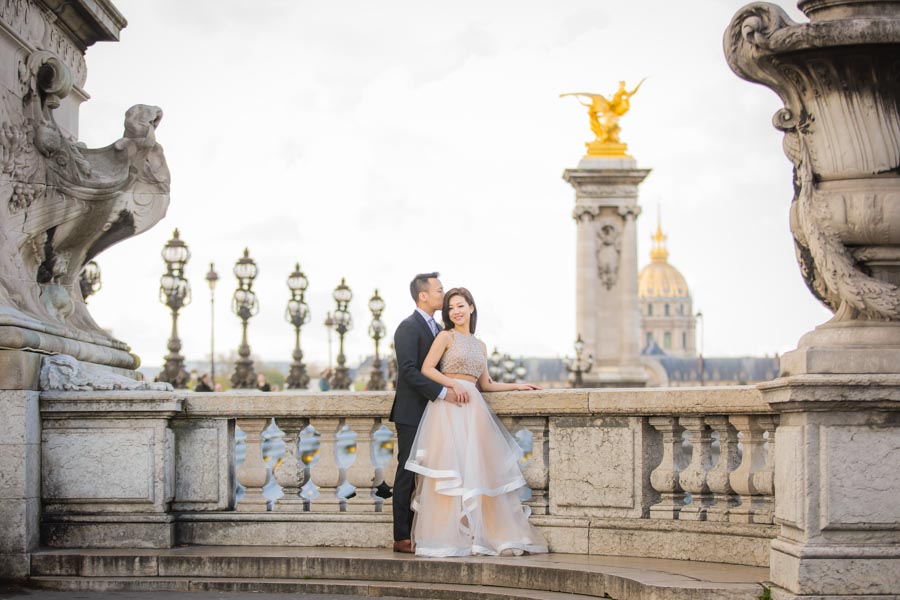 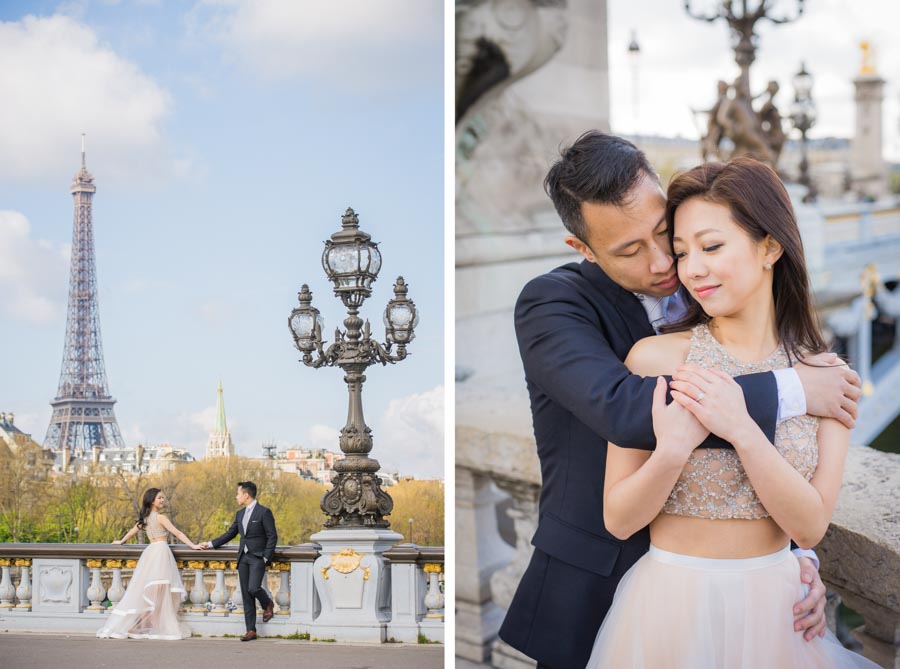 Do you already have plans or ideas for your wedding (eg. date, style, location)?
We are still trying to determine if we’ll one of wandering weddings (who knows, maybe a wedding in Paris ?), but we definitely want to bring in themes from our Paris trip!

What are your future plans together?
We plan to live together happily ever after! … and to visit Paris again!
–
Pictures by Pierre TORSET – Photographer in Paris

« Glamorous Paris wedding at the Shangri-La Hotel
Couple photoshoot with different views on the Eiffel Tower … and a bit more! »